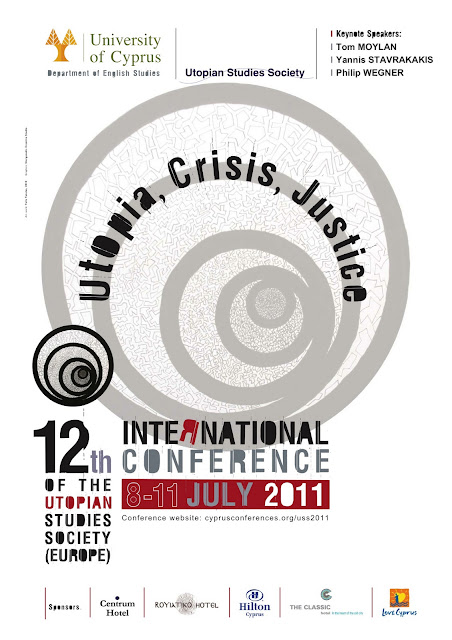 
From the devastation of the Athenian polis during the Peloponnesian war to the decline of the Greek world in the era of the Stoics, from the enclosures of the commons under the Tudors to the religious wars of the reformation and counter-reformation, and from the decline of the ancien régime to the upheavals of revolution and class struggle in the 19th century, “Utopia” is a name that has always been linked to crisis: as a reformist or revolutionary response to antagonisms and contradictions in the social, political and economic order, as a means of contemplating and urging a world to come during a period of transition and uncertainty.
But crisis is in Greek a word for judgment, both in the narrowly juridical sense and in the sense of intellectual appraisal and evaluation. The period of crisis is also a period demanding a critical anatomy of causes and a decisive gesture toward solutions: it is a period whose very exception from the “normal” flow of events instigates judgment. And thus, it is also a period in which the question of justice itself may obtain new force: as means of redressing a long-accumulating excess of wrong, of addressing the decrepitude or inefficacy of institutions meant to safeguard the right and good, of restoring lost balances.
Among the questions arising out of this critical configuration of concepts, the following stand out:
* The question of Utopia as a form of mobilizing the critical imagination that is both occasioned by crisis and intended to respond to it. The import—diachronically or synchronically—of crisis for periods of heightened productivity in Utopian speculation. The contemporary global financial crisis as a standpoint from which to think the place of crisis in the history of Utopian thought and practice.
* Utopia and the temporality of crisis: the importance for Utopian aesthetic and social practices of the sense of arrested time, of time set adrift from a proclaimed and previously accepted telos; the significance of notions of suspended, out-of-joint, anticipatory or transitional time for utopian thought (interregnum, disadjusted time, state of emergency, kairos, jetztZeit, novum). The import of the multiple temporalities of parallel crises, for instance of the much longer-scale crisis of the environmental planetary order compared with the generally shorter cycles of crisis in the global economic order.
* The crisis of Utopia itself: the possibility of a waning of the Utopian impulse, or of its transmigration in aesthetic and discursive forms not traditionally associated with Utopia; the crisis of Utopia as a notion adequate to the demands of social transformation as it is evidenced in a variety of theoretical and artistic anti- or quasi- or non-utopianisms.
* The relation between utopia and the problem of justice; the position of Utopian thinkers and texts vis-à-vis the possible distinction between justice and the law; varieties of antinomian understandings of justice; reflections on the ethical foundations of utopian thinking and practice in concrete historical conjunctures; discussion of strands of Utopianism for which morality is an inadequate foundation from which to deal with the intractable problems of systemic social injustice.
* Utopia as a form of critical judgment on existing social, economic and political arrangements; reflection on the modalities of Utopian critical judgment—rationalist or reformist, prophetic or apocalyptic, ironic or satirical.
* The uses and limits of the notion of crisis. Is “crisis” in crisis? Is it a term suffering from the same semantic inflation Utopia has been found to suffer, given its constant and often indiscriminate deployment by historians, sociologists, or critical theorists over the years? Is it simply synonymous with the experience of modernity at large? Is a crisis that does not nominate a new political subject or make visible a new configuration of social forces still a crisis?
Deadline για περιλήψεις ανακοινώσεων (στα αγγλικά): 31 Μαρτίου 2011
Posted by Αντωνης at 12:06 μ.μ.